This week we rolled out improvements to our Standards Compliance functionality with the goal of making it easier to see where Draft objects have been copied from and what library and object they are being compared against.

Sidebar Compliance information for all objects

The editors for Draft Objects in TrialGrid have a sidebar that shows important information:

Previously this sidebar also included information about where an object was copied from and its standards compliance state - but this was not consistent for all object types. The editors were updated to ensure that all now contain:

We added Standards Compliance for Test Cases. These can now be copied from a library and compared against it just like Forms, Edit Checks etc. This means you can store Tests for your Edit Checks, Forms and other objects in a Library and track changes to them.

Where did this Object come from?

As a Study Builder you sometimes you want to copy an object from a Library but it is also very common to copy an object from a previous study. Previously, TrialGrid would remember which Draft an object was copied from and always compare back to that object if the source was a Draft in a Standard library. This could be confusing so we now make it clear where the object came from and whether it came from a Library or just an ordinary Draft.

In this image you can see that our object was copied from an object called "CM" in the LIBRARY 1 project and the CDASH LIBRARY Draft. The library icon () tells us that this Project / Draft combination is a library.

What am I comparing against?

It is now very clear where an object was copied from but what library is it being compared to? The next section of our sidebar provides that information. 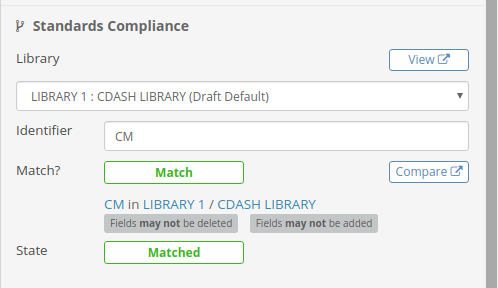 Note that these changes mean you are free to copy an object from any other Draft (e.g. a sister study) and it is clear what the object is being compared against.

Calculating the object to match to and its compliance state (Matched, Different, Different with allowed changes etc) doesn't take very long for each object but if you have thousands of them it can take a few seconds. Previously the system calculated compliance every time it showed an object listing but some clients have thousands of objects and this caused poor performance. Object status is now calculated in the background and stored with every object. This improves the performance of listings but means that switching the default library for a Draft will cause recalculation of object status. Normally this will happen within 30 seconds even for a large study.

We plan on further improvements to Standards Compliance in 2020. If this is an area of functionality that you are interested in please get in touch!

In my last post I explained some of the standards compliance and comparison features in TrialGrid. Being able to determine compliance in a report is very useful but what about the Study Builder? How does a Study Builder know, during the setup of a Form, what the Standard allows to be changed and what must be preserved exactly the same as the Standard Object in order to maintain compliance?

In TrialGrid we present this information to the Study Builder in several ways so that they can build Forms compliant from the start. 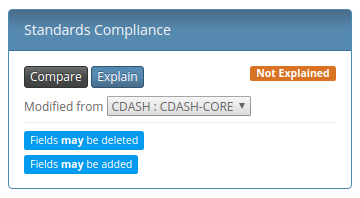 This summary is updated as the Form is saved so that the Study Builder can always see whether the Form they are working on is currently in a state of Matched (exactly the same as the standard), Modified (allowed changes have been made) or Not Explained (non-allowed changes made).

Secondly, changes which are allowed to individual properties of the Form or of any Field are marked with a pencil icon as shown here on the Name property:

The pencil icon signals that this property may be changed without breaking standards compliance.

Finally, although the Standard Form may allow some Fields to be deleted there may be other Fields which are Required and so cannot be deleted. These are marked in the Fields list with a "STD. Required" label:

Deleting a Required Field will mark the Form as non-compliant to the standard.

Our goal with TrialGrid is to bring activities like standards compliance checking into the study build workflow so that non-conformances can be explained and addressed as early in the process as possible. Just one of the ways that TrialGrid makes life better for Study Builders.

Medidata Rave Architect provides Global Libraries to organize standard design objects and a Copy Wizard to quickly pull those objects into a study design. These are useful tools for the Study Builder but really only cover the initial phase of study build. Lets look at an example of Standards in action to see how TrialGrid extends the capabilities of Rave Architect to support the use of standards through the entire study build.

We'll start with an example standard Form, loosely based on the CDISC Demography Form. Here is the design of the form in Architect.

This is the Form definition which is copied into a new study.

Changes to the Standard Form

In many cases a "Standard Form" will have some allowed changes. Some Fields may be optional, some Properties of Fields such as their Labels or Help text, may be allowed to be changed. Making these changes may not be considered a deviation from the Standard.

The following changes are made to the Standard Form by our Study Builder:

The challenge for the Standards Manager and for the Study Builder is to determine if the changes that have been made to this Form make it non-compliant. The Rave Architect Global Library stores the original Form and Architect provides a difference report which can help to determine the differences between the Form as pulled from the library and as-modified in the study:

The color coding shows that changes have been made to the Fields of the DM Form but it is difficult to read in the spreadsheet format and Architect doesn't have any concept of what changes are allowed to a Form or to Field properties so cannot be any help in determining if these changes are OK (compliant with Standard) or not (non-compliant).

If your process requires these kinds of changes to be reviewed by a Standards Manager or otherwise compared against a set of written rules for the use of the Standard this can become a very time-consuming activity, stretching timelines and increasing costs.

Next we mark the Global Library Draft as a Library and we link the Study Draft to it, actions that take about 5 seconds to perform.

Immediately the Form list shows that the DM form has been modified from the standard and that the changes are unexplained:

So what are those differences? Click the Compare button to find out: 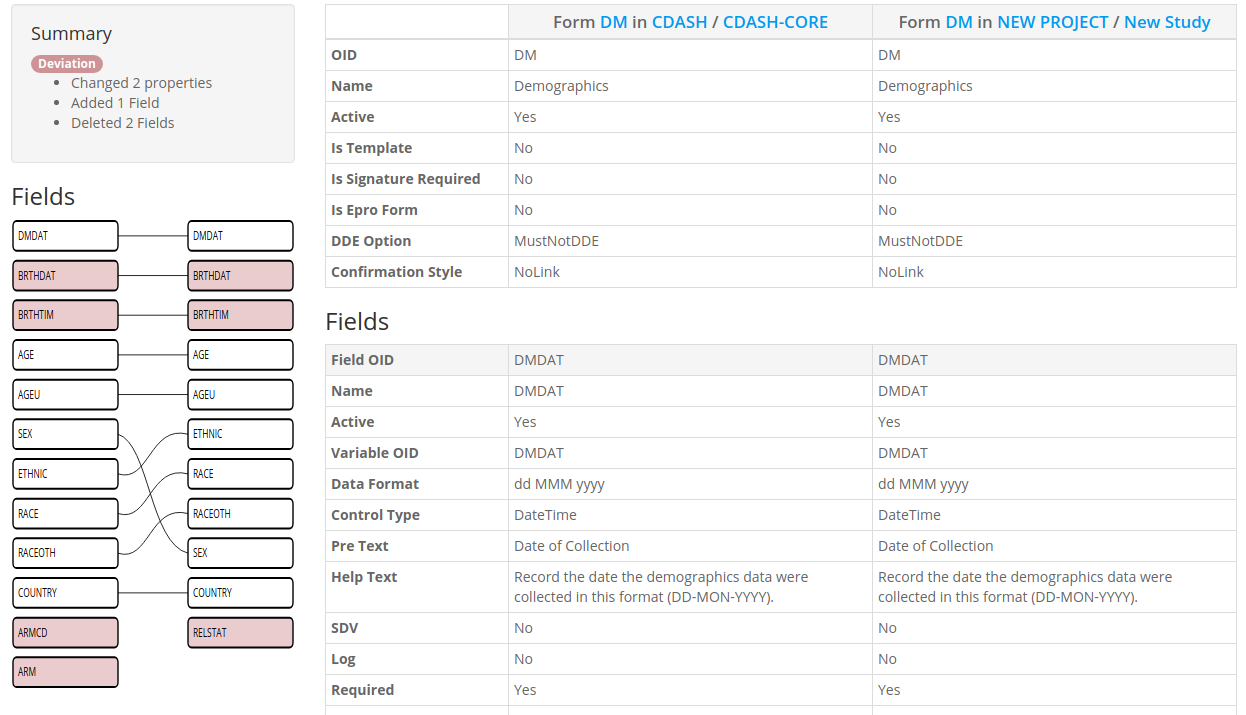 In the top left we see a summary of the changes which tells us which changes, if any, are deviations from the Standard. Below is a graphical representation of the Fields of the Form with the Standard on the left and the current Form on the right. Changes are colored in Red and lines between the Fields show how they match up. We can quickly see which Fields have changed and which have no equivalent between the Standard and the New. Fields which have been moved in the order are also clear to see, we can see that SEX has been moved down below RACEOTH in the new Form.

Clicking on any of the Field boxes takes the user to the Properties with any changes highlighted.

So far we have demonstrated that TrialGrid makes comparisons between objects easier but what about Allowed changes?

But there are some Fields we do not want to be removed such as Date of Birth. We can override this option for the Date of Birth Field. If our standard allows it we can also select properties which are allowed to be changed. Here we select "Pre Text" (the question label) as an allowed change and mark the field as Required by the Standard.

Finally, for Time of Birth we can allow the Active property to be changed (not shown in screenshot).

Now when we return to the Comparison view we see that all our changes are now shown in green. 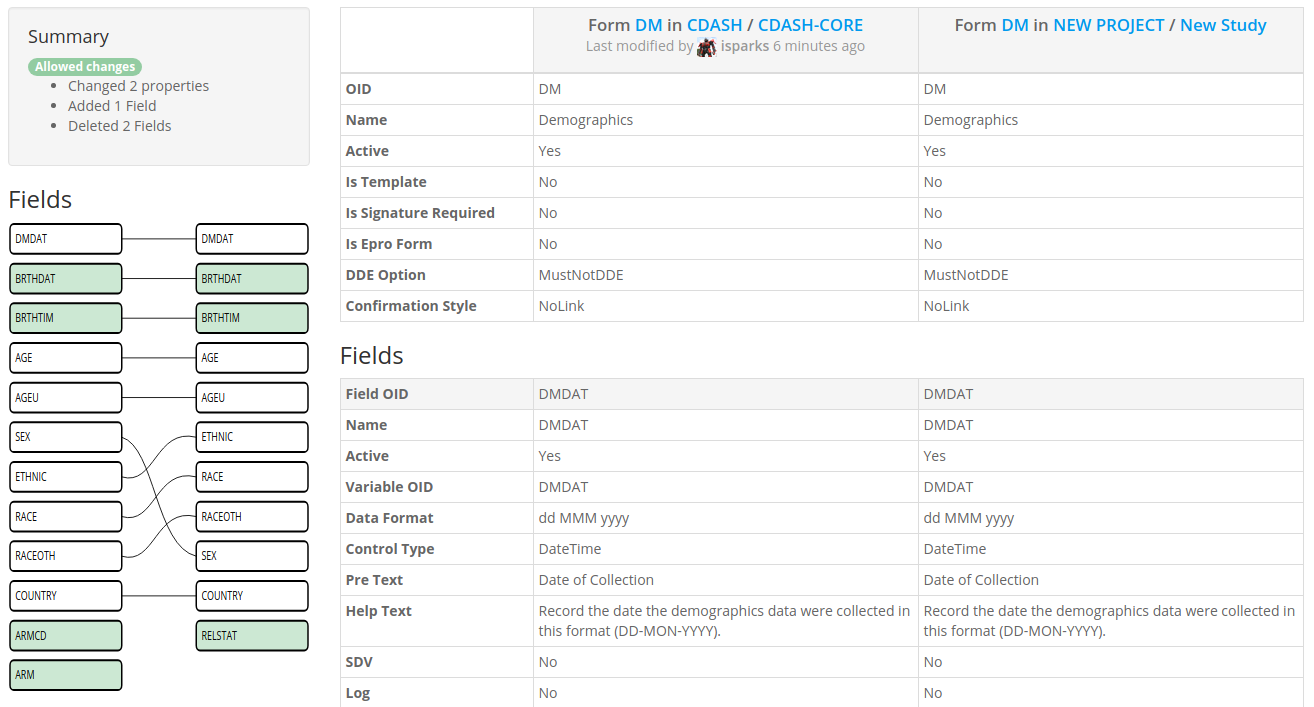 If you recall from the start our changes were:

The goal of this post was to demonstrate how the Standards Compliance features of TrialGrid assist study teams in tracking compliance without having to use the Architect Difference Report. The Allowed Changes feature reduces the workload on the Standards Manager or Global Librarian so that they do not have to manually review and approve every tiny change to any element of a Standard Form.

There was no space in this post to go through the workflow for Standards Compliance approval requests and the reporting aspects of this feature, I'll save that for a future post. If you are interested in seeing more of this feature, please contact us.