Using Standard Libraries is an excellent way to achieve study build efficiency but within a study some variation from a Therapeutic Area or Global Standard is expected or even encouraged. So how do you, as a Customer of a study build team, get assurance that what has been delivered to you matches the appropriate standard and that all deviations have been identified, explained and approved?

Some organizations manage this by using difference reports to identify changes between a standards Draft and the Draft as built. These reports will be run on some interval, usually toward the end of the study build process as a hand-off check. But the later you find out that a non-standard Form, Edit Check or Custom Function has been used in the study build the more expensive it will be to correct.

At TrialGrid we want to bring these kinds of checks into the process earlier and make the workflow of standard library compliance and approval an interactive one.

In TrialGrid, any Project can Contain Standard Library Drafts, it's just a checkbox for the Project.

Then any Draft within that Project can be selected as a Standard Library.

This makes it simple to create a Standard Library in TrialGrid, just upload the Architect Loader Spreadsheet of the Draft you want to be a library into a Library Project.

Standard Libraries are generally arranged in a parent-child-grandchild structure. For example, there could be a Core Standard Library which contains Forms and other objects used in all kinds of trials. A descendant of the Core Library could be a Therapeutic Area (TA) Library with new Forms and Dictionaries used only in that TA and with overridden properties of some Core objects (such as additions to an AE or CM Form). Descending from the TA Library could be a Program specific Library.. and so on. This gives you a tree of standards with your Core standard at the root and ever more specific versions branching from it. We call one path through that tree, a "Compliance Chain".

At one end of the chain is your Core Standard Library and at the other end is your particular Study build and there can be any number of Standard Libraries as links in between.

This chain is important when we want to check compliance because if we want to be sure that, say, the AE form is compliant we check the first Standards Parent in the chain. If the AE form is not found there we see if that Standards Draft has a parent and if so we look for the Form in that Draft stopping when we find it or when we reach the end of the chain.

Whenever you import or make any change to a Draft object, TrialGrid calculates a "fingerprint" for that object. It then can compare this fingerprint to objects of the same name in the Standards Chain and tell you if they match, are different or are not found at all.

One of the benefits of this approach is that it allows you to run "what if" scenarios and perform impact assessments very quickly. Switch the Standard Library for the Draft and you can immediately see the level of conformance to a different standard. Great for checking impact of new Standard Library versions.

A particular benefit for Study Builders is that the fingerprint of a Form or other object is the same regardless of its source. That means you can copy objects from an existing study, TrialGrid doesn't care where they came from, only that they match or don't match what is in the Standard.

Comparing Objects can be done right from the Object Listing. The color-coded line-by-line comparison shows every change.

Being able to compare the objects side by side makes it easier to explain why there has been a deviation from the standard.

The workflow permits a Study Builder (or anyone with Standards / Request Approval permission) to request Approval and a Standards Manager to Accept or Deny the request. If an object is changed after an Approval is granted it is reset and will again require Approval. 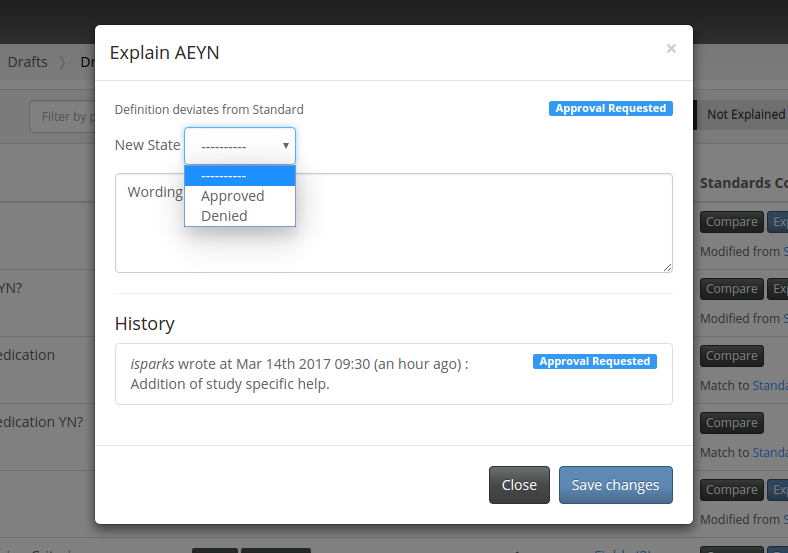 Every change in the workflow is tracked with comments and a full audit trail so that you can see who Approved, when.

The Compliance dashboard (with associated PDF detail report) shows a breakdown of which objects are Compliant (a Match found in the Standard), Different or Not Found and of those which have an Approval Request which are Approved and which Denied. 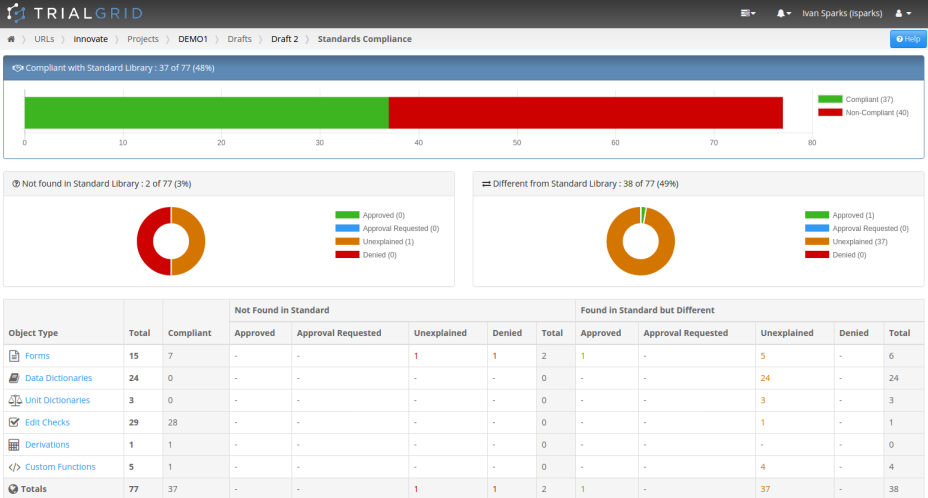 In summary, TrialGrid's Standards Compliance features are easy to use and provide instant feedback on the compliance of your study Build to the Standard Library.